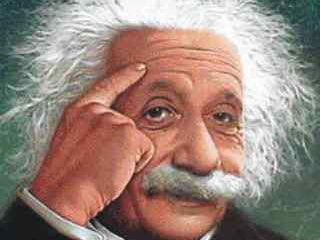 Despite the inspirational stories of teaching gifted students, the work can be taxing. The conventional teaching methods must be constantly evaluated and modified to meet the unique needs of these gifted and talented students. They needed more mental stimulation. They wanted more challenging activities. They are easily bored. Meeting the needs of gifted students can exhaust the teacher's creativity. The good news is that inspiration for creativity can be found everywhere. For example, teachers can follow the advice of Ralph Waldo Emerson - "Do not go where the path may lead. Go instead where there is no path and leave a trail." This is a deep-seated but often unexpressed credo of geniuses. As proof, teachers can look at the lives of famous gifted and exceptional people. These real men (and women) of genius, before making great contributions to this world, had been students too

Here is a short list of famous gifted and exceptional people.

Albert Einstein is obviously at the top of the list. But Einstein, as a child, could have been frustrating for his parents and teachers. According to stories about him, Einstein never learned to speak until he was four years old. Then, he had the bizarre habit of mumbling something first before saying anything out loud. His giftedness was obvious at a young age because he was always at the top of his class. But he hated school because he believed that the strict rules and rote learning held back his creativity. Eventually, one of his greatest works, the theory of relativity, left a new trail in the world of physics. Could your routines in the classroom hold back your students' creativity? Try something new and unexpected

Thomas Alva Edison is probably the greatest inventor of all time. With more than a thousand patents in his name, including the light bulb and the phonograph, he certainly deserves the honor of being called the "wizard of Menlo Park." But when he was a child, he was struck with scarlet fever that probably led to hearing problems. In school, his teachers complained that he inattentive. The teachers were not happy with his daydreaming that in the end, he had to be homeschooled. Have you given up on any of your gifted students? Maybe that student's entrepreneurial spirit just needed a nudge in the right direction

Leonardo Da Vinci is the quintessential Renaissance Man. He was an engineer and a painter, a mathematician and a musician, a writer and an architect. His talent and giftedness were honed during his many years of apprenticeship with master craftsmen and painters, such as Verrochio. Da Vinci, of course, had more talent than his masters, but he owed his learning to them. Your students will have IQs that would be higher or lower than yours. But you are their source of learning

Marie Curie, born Maria Sklodowska, was a star pupil. Despite bankruptcy of the family and political turmoil, she was nurtured emotionally and intellectually by her father. But at 15, after graduating at the top of her class, she suffered a nervous breakdown. After a year of rest, she went on to attend an underground medical school because the oppressive regime of the czar does not allow women to get higher education. She went on to become the Mother of Modern Physics after being awarded twice with the Nobel Prize. Gifted and talented students are not immune to problems. But if given the chance, they can move on and do great things.

These are just some of the famous and gifted exceptional people. They faced seemingly insurmountable challenges but they had mentors, like you, who helped them become successful and exceptional.